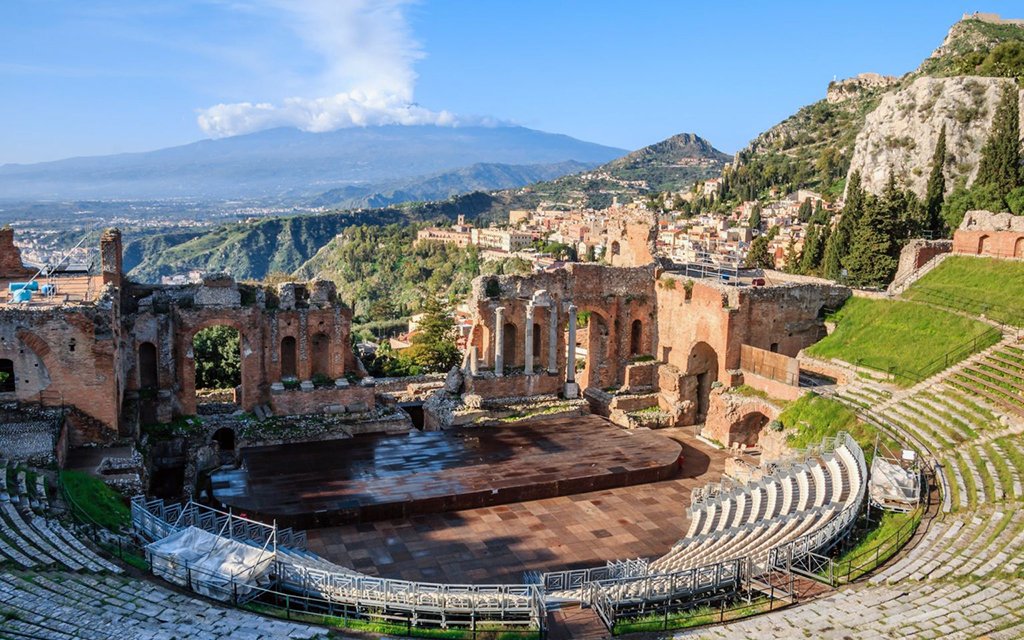 Taormina is the main tourist Sicilian destination.
The old town centre of Sicily is situated at about 200 meters above sea level enjoying a wonderful view over the Ionic coast and the Mount Etna, which makes it one of the most beautiful terraces in the world.
Over the centuries this resort have charmed tourists and visitors coming from everywhere. They have decided to give themselves up completely to its unique atmosphere, full of natural and cultural attractions and a warm climate during all the year making it the place of the eternal spring.
The Graeco-Roman theatre (important location for international conventions), the Corvaja Palace, the Naumachie, the Duchi di Santo Stefano Palace and other attractions make Taormina city an excursion not to be missed. The wonderful Taormina sea, The Isolabella and the Mazzeo beach, Spisone and Mazzarò are easy to reach from downtown by the new cableway working up to late in the night. 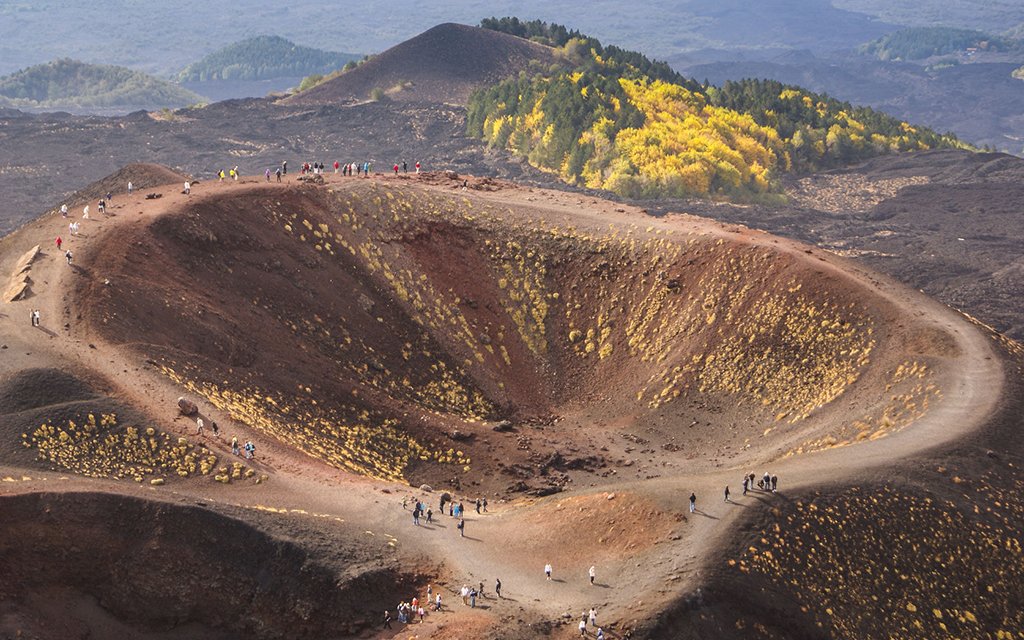 Mount Etna is highest active volcano in Europe, with an area of about 600 cubic km and an height of 3.348 meters above sea level. The slopes of Etna hosting over 250 cones that were once active craters opened at various altitudes. Certainly among the most famous craters we have “Red Mountains”, that opened in 1669 at an altitude of 800 m. above sea level and “Silvestri”, that opened in 1892 to about 2000 m. above sea level.
In the top of Etna we can see four craters open pipe, called: Bocca Nuova Voragine, Southeast Crater, Northeast Crater, having each of them an average diameter of 250 meters. The eastern part of the volcano hosts the Valle del Bove, a caldera formed about 10,000 years ago, whose size is about 10 km to 7 km, 900 meters deep. The Valle del Bove was born after an impressive caldera collapse. Even today you can see clearly that the geological structure strongly dominates the landscape of the eastern slopes of Etna. 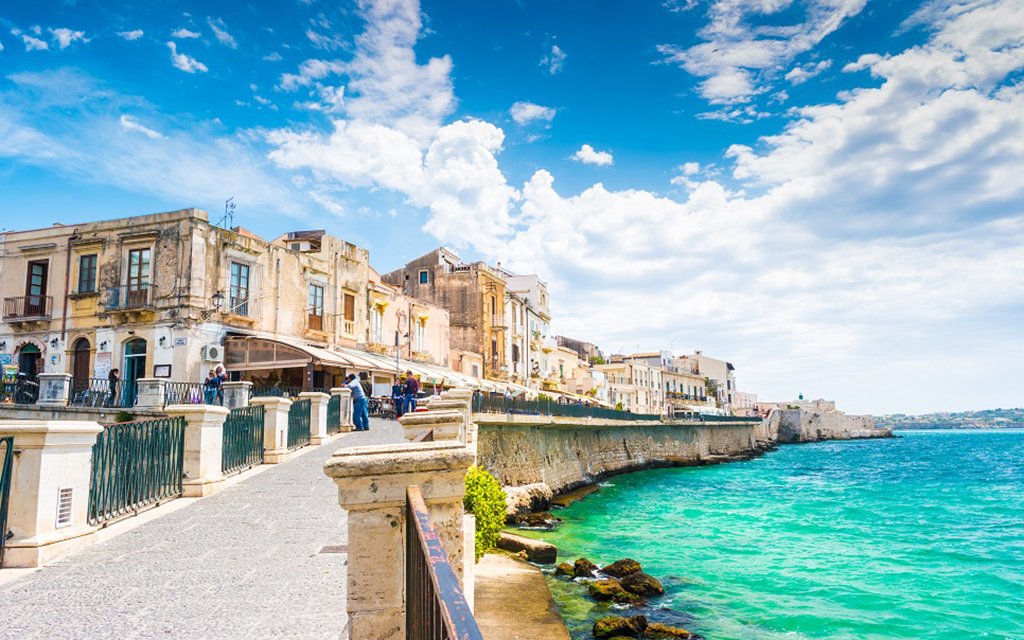 Syracuse is lying on a smooth bay that stretches into the sea with the island of Ortigia. Immediately behind Ortigia the Acradina extends, so was called in antiquity the flat area adjacent to Ortigia. And then the Neau polis, the “new” area where is situated the theater, the Ear of Dionysius and the latomia of Paradise, one of the most beautiful. To the east, the neighborhood of Tyche, which recalls the presence of a temple dedicated to Fortuna goddess (Tyche from the greek, the case). Dominates the Epipoli, guarded and defended by the castle Euryalus, in an elevated and strategic position. Syracuse, the city of art, dominated by the baroque architecture, it is the residence of an archaeological museum of extraordinary importance. The National Archaeological Museum, one of the most important in its way, keep fundamental material for the knowledge of the prehistory and for the early history of Sicily. City historically linked to the culture and the arts, country of Greek poets and writers and destination for pilgrimage: Plato, Cicero, Caravaggio, Von Platen, Maupassant, Gide, Wilde. Fascinated by the history and myths. Today we can relive the splendor of its beautiful Greek theater thanks to classic performances organized every year from INDIA Institute of Ancient Drama, while the recent OrtigiaFestival event collects the modern names and plays. One of the oldest cities of the Mediterranean, rich in history and monuments, Syracuse express thoroughly the variety and complexity that characterized the cultural life of Sicily from the beginning to the present. 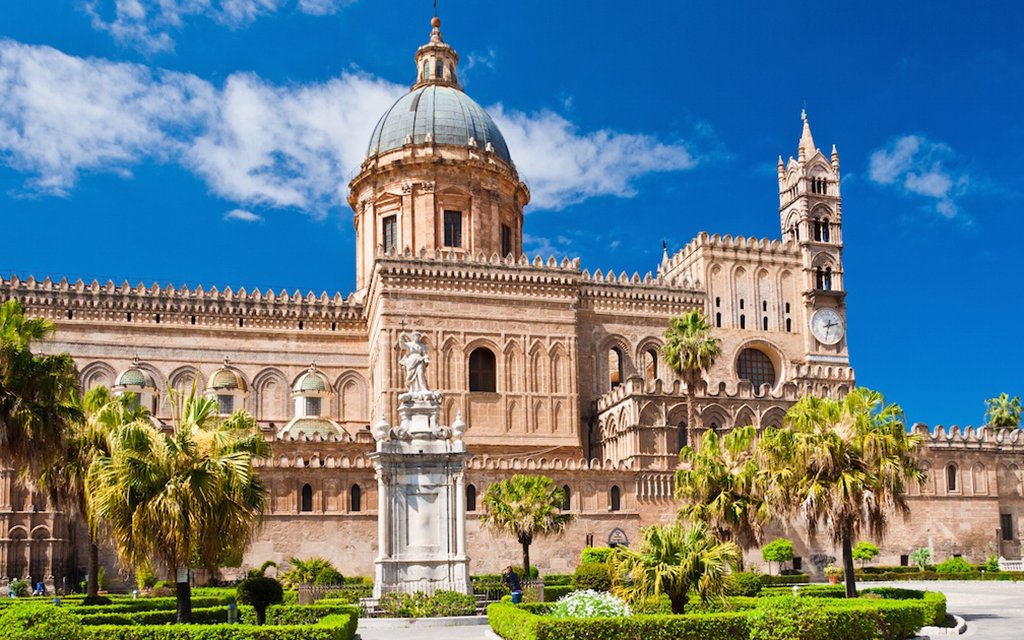 The city of Palermo (Palermu in Sicilian) is the capital of the Sicilian Region and it is the host of Sicilian Regional Assembly and of the province. Fifth largest city by population is the thirtieth in Europe, after Rome, Milan, Naples and Turin and it is the main cultural, historical and economic-administrative centre of Sicily. His remarkable artistic and architectural heritage is represented by the remains of Punic walls, country seat in art nouveau style, residences in Arab-Norman style, baroque churches and neoclassic theaters. It is one of the largest cities in the Mediterranean and the major tourist destinations of Sicily, of Italy and Europe. Palermo has the highest number of monuments in the town center, but many are distributed in throughout the territory of Palermo, as the many historic villas, clock towers, traps, ancient graffiti or simply old churches and noble palaces. Its historic center, which is one of the largest in Europe, is undergoing considerable refurbishment and restoration in order to be insert with the Botanical Gardens and the Cathedral of Monreale among the possible sites of UNESCO. The historic center of Palermo is divided into four districts (Loggia-Castellammare, Tribunali-Kalsa, Palazzo Reale e Monte di Pietà-Capo) related with the two main historical streets: the Cassaro and Maqueda street, perpendicular to the first road and that, in the junction with this, create the Quattro Canti di Città Square. 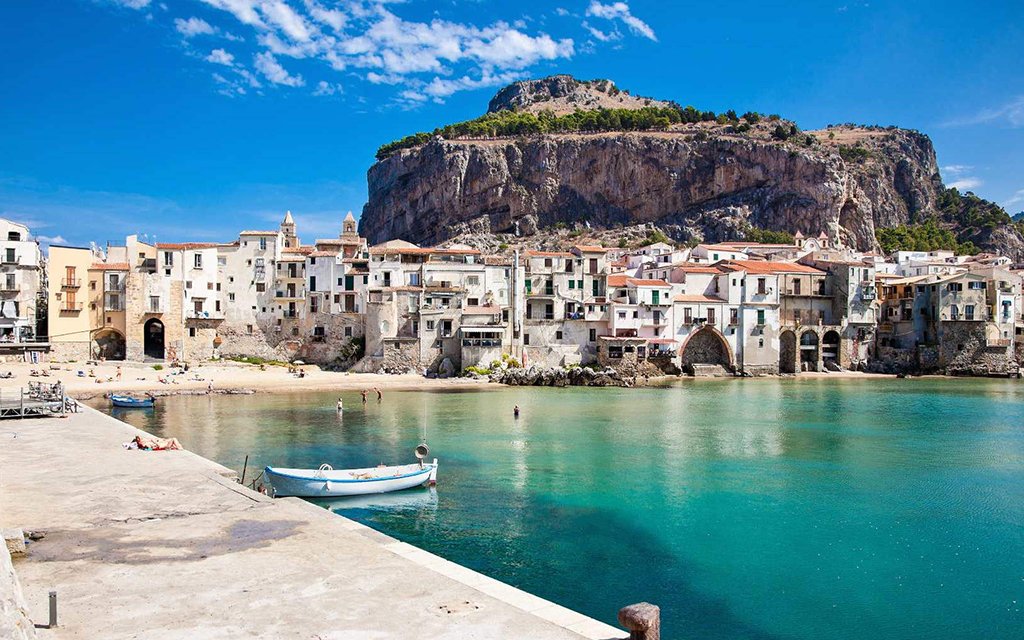 Located in an exceptional position, visible from the road that leads with Palermo, Cefalù is a fishing village, located between the sea and a limestone promontory, proud of its Romanesque cathedral that emerges from a tangle of narrow streets. City of Greek origin, from which it takes its name, Kephaloidion. It enjoy its greatest splendor under the Normans and in particular with Roger II in 1131 that decided to start the construction of the cathedral. The territory of Cefalù, in addition to the Madonie Park’s hills and mountains, offers beautiful walks and unspoiled nature offering, in addition to many scenic and natural beauty, orchids and some gastropods such as Helix Mazzullo, the Vermiculite and the cephaleditana. The beauties of the area are added to the wealth of monumental heritage of the city. Significant medieval buildings are present in the city: the Palazzo Maria(Cathedral Square) and the Osterio Magno (Corso Ruggero). These two developments have been wrongly identified as the Domus Regia of Ruggero that, instead, was incorporated into the Bishop’s Palace, in the part adjacent to the Canonica. 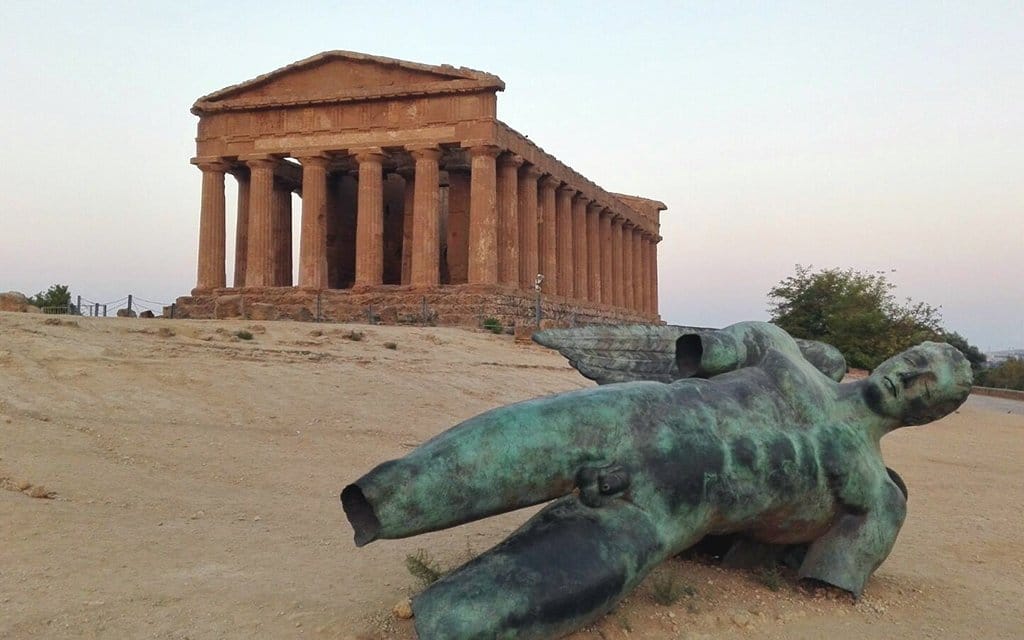 The city of Agrigento (Girgenti in Sicilian) throughout its history has had four names: κράγας for the Greeks, Agrigentum for the Romans, Kerkent for the Arabs and Girgenti to the Normans. Girgenti was also the official name of the city until 1929, than it changed its name in Agrigento. Its province represents a famed Sicilian tourist destination of great importance thanks to its important archaeological site with the historical, natural and folkloristic Valley of the Temples. Each year in Agrigento takes place the cultural event “Mandorlo in Fiore” which occurs in February and held in the mythical Valley of the Temples; in recent years associated with the International Folklore Festival. The Valley of the Temples, considered one of the main tourist destinations in Sicily dates back to the Magna Grecia. Since 1997 it has been inserted in the list of humanity world heritage sites by the UNESCO. It is characterized by the remains of seven temples in Doric style: their names and their identifications, except that of Olympeion, are presumed to be humanistic speculation too, which, however, remained in common use.

The city of Ragusa (Rausa in Sicilian), capital of the province of Sicily, is situated in the southern part of Iblei mount and it is the seventh town of the region for its population. It is the richest municipality of the island and among the wealthier of southern Italy. It is called the “City of Bridges” for the presence of three structures, very picturesque, but it was also defined by writers, artists and economists as the “island within an island” or “the other Sicily”, thanks to its history and a socio-economic context that is very different from the rest of Sicily island. After the earthquake which destroyed the city almost completely in 1693, it was divided into two parts: the superior part of Ragusa, lying upland and the other Ragusa Ibla, risen from the ruins of the city and rebuilt according to the ancient medieval structure. The architectural masterpieces built after the earthquake, together with all those in Val di Noto, gave birth to one of the largest sites of UNESCO in the world. Ragusa has many baroque buildings included in the list of humanity world heritage of UNESCO 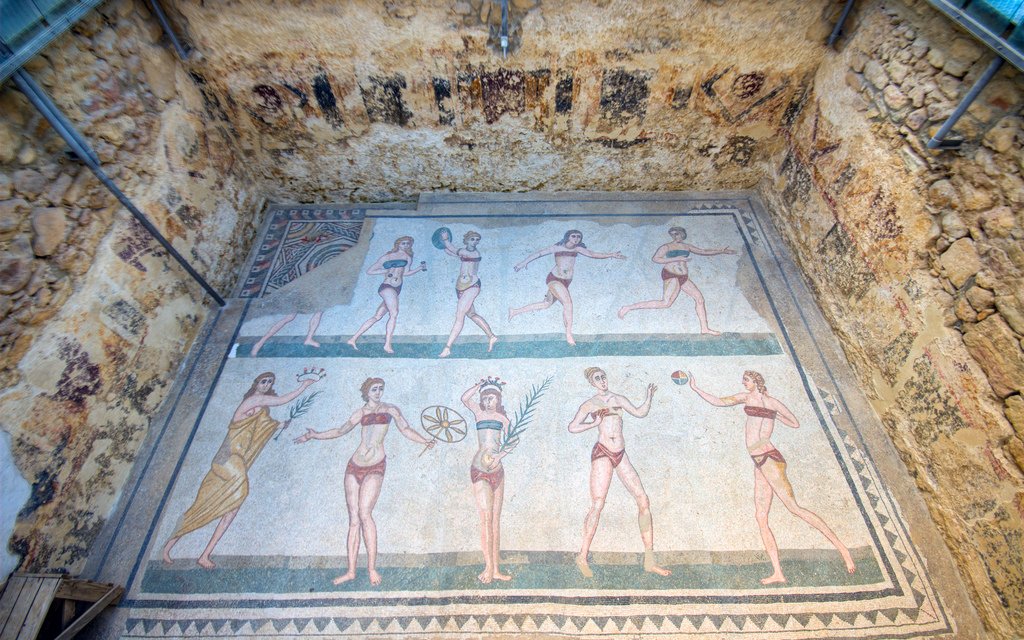 The monuments, churches and ancient buildings, the Sicilian baroque style make of Piazza Armerina a splendid city of art. Piazza Armerina is the center of a vast, archaeological and classical area (Montagna di Marzo, Monte Naone, Rossomanno, Monte Manganello, etc..), its territory of great interest for the archaeological excavations, especially those of the Villa Romana del Casale, was inhabited since prehistoric times, at least from the seventh century. BC onwards. The Villa Romana is located in the Casale near Piazza Armerina, dating from the late third century AD. Beautifully decorated with mosaics, was discovered in the late 1800 before being fully brought to light in the middle of 900. Probably we are talking about a luxurious, private residence belonging to a powerful roman family. Unique of its kind especially for the type of mosaic whose pieces are very small. The effect obtained is certainly impressive, the images are detailed, colorful and nuances. With the spectacular Palio, Piazza Armerina each year (from 12 to 14 of August) relives sounds and atmosphere of the medieval period. In the beautiful setting of the old town ladies, knights, army and militia create an attractive “return to the past.” 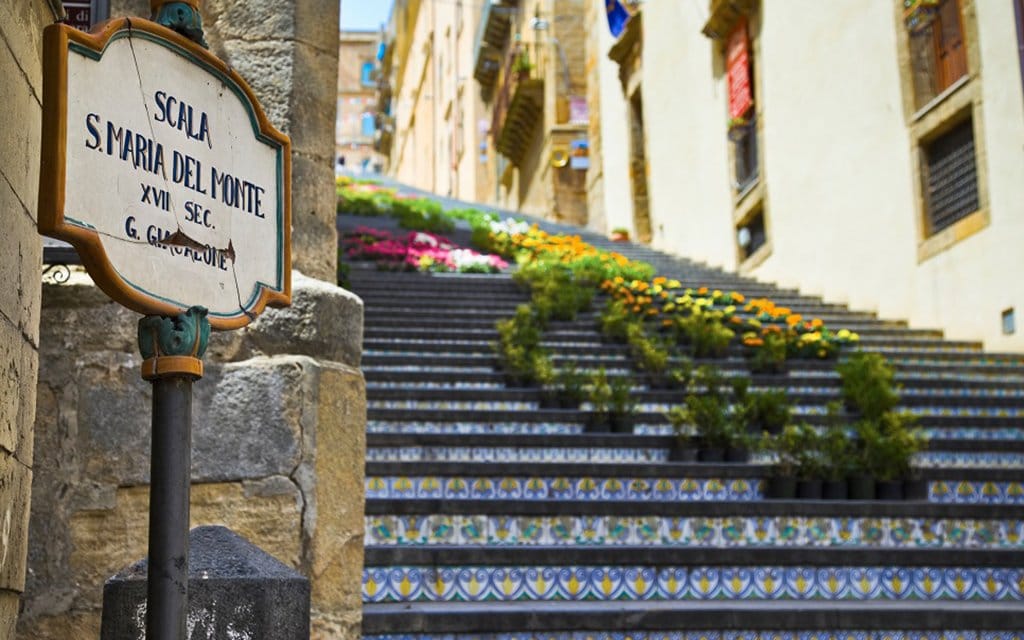 Caltagirone dominates the plain of Catania and Gela amphitheater between the mountains Iblei and the mountains Erei. It is known worldwide for its handmade pottery that still committed hundreds of artisans. The art of majolica has ancient origins: the first furnace date back to the Muslim and Norman Age testimonies of an activity that has never been extinguished over the centuries; besides it is also the residence of the Regional Museum of Ceramics since 1965. Among ocher-colored buildings rising churches, baroque bell towers and the beautiful Town Park, the most elegant public gardens of Italy, built in ‘800 by Giovanni Battista Filippo Basile. Of particular architectural interest are the Norman Cathedral dedicated to St. Julian who keeps beautiful paintings works of Francesco Vaccaro, the Church of the College built by the Jesuit in 1593 and the Church of St. James rebuilt after the earthquake of 1693.The Via Roma is the main street that bisects the city and stretch itself till the famous St. Maria del Monte Steps. Along the way overlook some of the most interesting buildings, with numerous examples of majolica decorations.

TAXI AND TRANSFERS IN CATANIA AND ALL SICILY